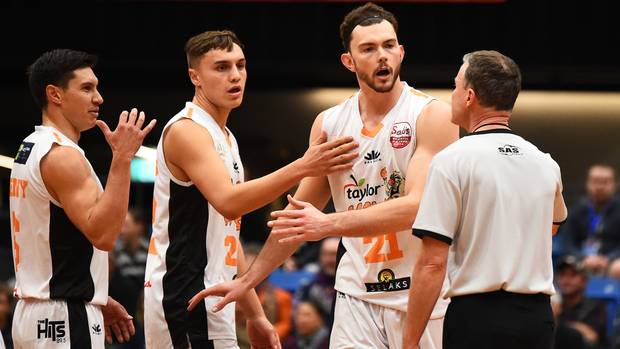 High from a hard-fought battle the night before, the Hawks became road kill 24 hours later at the house of the Nelson Giants.

The hosts pretty much did the job without much input from Tall Blacks captain Mika Vukona who only got on the court for a shade under five minutes.

The Jamie Pearl man-coached Giants made it abundantly clear what their intentions were from the opening whistle claiming the first quarter 21-10, second 30-19 and the third 27-23.

The visitors claimed the final spell 26-23 but it was painfully obvious Australian mentor Pearlman had applied the mercy rule because the points were well and truly in the bag.

Kyle Adnam claimed a game-high 23 points while Damon Heuir contributed 18 points to help secure Nelson’s seventh victory for the season as they shuffled to the top rung, two ahead of defending champions Cigna Wellington Saints although they have played a fewer game.

If lethargy was a factor for the Jarrod Kenny-skippered Hawks after the ding-dong battle against the Wheeler Motor Canterbury Rams last night then coach Zico Coronel has his work cut out in convincing his troops the need to man up for two consecutive nights because that’s what they’ll need on the road if they make the Final Four playoffs this NBL season.

If the Hawks had hung their hats on the pillar of defence against the Rams then leaking a three-figure total to Nelson raises a few questions.

To be kept below 80 points also poses questions on whether the offensive department had had a good night’s sleep in their motel.

However, it didn’t help the visitors’ cause when Australian import centre Angus Brandt got called for a technical foul in the second quarter to rob him of further play in the remaining minutes that spell.

The hosts didn’t need a second invite to feast on the lack of big man presence, especially Heuir who had racked up 18 points (4/5 from outside the arc) to help the Giants post a 22-point gulf heading into the locker rooms.

That margin gave Nelson captain Sam Dempster and his merry men the licence to thrill in the second half. They went into overdrive to chance their arm, especially from downtown, to establish a shooting statistics of 17 three pointers from 34 attempts compared with the Hawks’ six from 23.

Finn Delany, who didn’t play in the Giants’ loss to Hawks in Napier last month, scored 17 points, collected eight off the glass and claimed four steals while Jerry Evans Jnr joined the big bash with 15 points.

Vukona, making his first appearance for his hometown since 2015,is reportedly working towards assuming the mantle of player/assistant coach.

Despite his down time, Brandt top scored for the Hawks with 20 points. First-season swingman Ethan Rusbatch, after an emotionally-charged clash against his hometown last night, added 16 points.

Hyrum Harris came off the bench to add 14 points to remind Coronel he was there if called on.

Kenny claimed a double-double with 11 assists to add to his 11 points.

The Hawks trio of Everard Bartlett, US import forward Jamie Skeen and swingman Dion Prewster went back into winter hibernation for a collective six points.

The loss puts the Hawks to 5-4 and not too flash a record on the road. Their third encounter against the Saints at the Pettigrew-Green Arena, Taradale, next Sunday will become another litmus test after two losses to the powerhouses in the capital city this season.