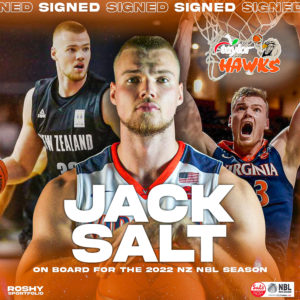 Jack Salt (born 11 February 1996) is a New Zealand professional basketball player for the Brisbane Bullets of the Australian National Basketball League (NBL). He played college basketball in the United States for the Virginia Cavaliers, where he was a member of their 2019 national championship team. Salt has also been a member of the New Zealand national team in various FIBA competitions.

Born in London, England, Salt grew up in Auckland, New Zealand, where he had a distinguished career at Westlake Boys High School. In 2013, Salt debuted in the New Zealand NBL for the Super City Rangers, averaging 8.6 points and 5.4 rebounds in 14 games.[1] After a stint as a development player with the New Zealand Breakers of the Australian NBL during the 2013–14 season,[2] Salt played for the Waikato Pistons during the 2014 New Zealand NBL season, averaging 7.1 points and 4.6 rebounds in nine games.[1]

In 2013, Salt signed with coach Tony Bennett at Virginia to play college basketball.[3] Salt took a redshirt in his first year on campus to gain weight and strength for his debut season in 2015–16. He played sparingly in his redshirt freshman season, but then became a steady rotation player for the Cavaliers for the rest of his career.[4][5]

In Salt’s senior season, the Cavaliers began the season still stinging from becoming the first top seed to lose to a 16 seed in the NCAA Tournament. The Cavaliers won a share of the Atlantic Coast Conference regular season title and were again a number one seed. While playing modest minutes through much of the tournament, Salt played a key role against Purdue in the Elite Eight. Matching up against the Boilermakers’ big and physical front line, Salt played 34 minutes and scored 5 points, grabbed eight rebounds and collected a pair of steals to help the Cavaliers to an overtime win and a spot in the Final Four.[6] Virginia then defeated Auburn and Texas Tech in the Final Four to win the school’s first NCAA basketball championship. Salt became the first New Zealand native to win an NCAA Division I national championship.[7]

For his Cavaliers career, Salt started in 106 games, averaging 3.3 points and 3.5 rebounds per game in a role primarily as a defensive specialist.[8]

After not being selected in the 2019 NBA draft, Salt joined the Phoenix Suns 2019 Summer League team.[9] On 26 July 2019, he signed with Trefl Sopot of the Polish Basketball League (PLK), after considering his home country New Zealand Breakers.[10][11] However, he failed to join the team due to health problems.[12]

On 6 February 2020, Salt signed with the Canterbury Rams for the 2020 New Zealand NBL season.[13] However, a knee injury ruled him out of the six-week competition.[14] After a full recovery Salt, re-signed with the Rams for the 2021 season.[15] He played the start of the season before a minor knee injury sidelined him during the mid part of season.[17] He played the remaining nine games for Canterbury.