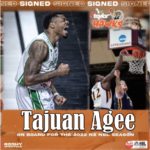 “Hawks Bolster the big man department with athletic Agee touching down in the Bay.”

The search for a player to help the Hawks post stocks has concluded with talented, athletic and versatile post Tajuan Agee joining the team. A native of Chicago “Juan” as he is affectionally known just touched down in the Bay, dropped his luggage, met the team and joined the group for the trip to the South Island.

Agee has recently completed a stint in the highly regarded German Pro A league with Rasta Vechta, after joining them with a 2-7 record, his impact helped the team finish the season strongly at 16-16. This stint in Germany followed a rookie season in Europe for club Balkan who played in the FIBA Euro Cup and Basketball Champions league and the domestic Bulgarian league, where Agee averaged 12 pts & 8 rebs in 21 mins of play.

“What really stood out was how mature and easy to talk to Juan was in the recruiting process. He understands team dynamics and has played on deep rosters, so he is happy to play whatever role is required for us to be successful. Speaking with his coach from Germany they were wrapped with what he brought to the locker room and court and wouldn’t hesitate to have him back (always a good sign). Once over the jet lag and with a few weeks with the group we’re really looking forward to what Juan can bring.” Coach Mick Downer

“After hearing the team reached the finals in recent years I jumped at the opportunity knowing it is a great team and to be that piece that can help win it all by playing my role. I’ve played with veteran teams before, and hope that I can be that energy guy that lifts the team,” Agee added.
.