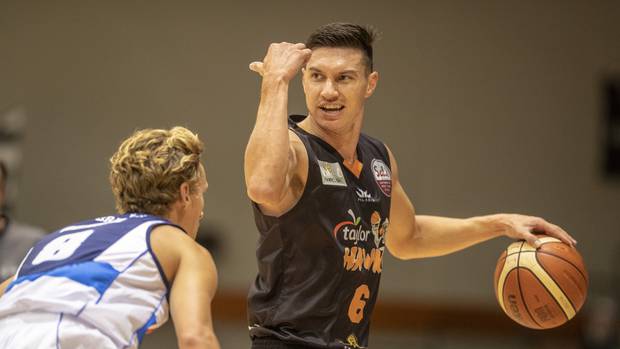 Ethan Rusbatch reckons he got more than a few dirty looks from his Hawks basketball teammates during the side’s first National Basketball League loss of the season in Wellington on Friday night.

They were justified too. The Taylor Hawks shooting guard struggled to replicate his previous form in the Sal’s NBL as the Hawks were beaten 93-85 by Cigna Saints.

The aggression the 2017 Canterbury Rams co-skipper lacked the previous night returned and he finished with 20 points including five three-pointers, three rebounds and an assist.

“We didn’t execute the game plan last night but we did what the coach wanted us to do tonight,” Rusbatch said as he signed autographs afterwards.

While he was quick to acknowledge the contribution from a near-capacity crowd he also praised the Giants for the effort they put in after a difficult day. The Giants arrived in Napier five hours after originally scheduled following a flight delay in Auckland as they flew to Auckland on Saturday morning after their win against Taranaki in New Plymouth on Friday night.

Hawks head coach Zico Coronel had every right to praise his team’s improved final quarter effort after a sloppy final 10 the previous night.

“At the same time we do not know if we have made the necessary improvements yet and we won’t know until we play a team with the same tempo as the Saints.”

“They’ve gone from a team with four wins and 14 losses last season to championship contenders. We were lucky to get them tonight without their experienced power forward Finn Delaney who was unavailable and before Mika Vukona joins them. And that Damon Heuir did what so many Aussies do in this league … he is one hell of a player.”

Shooting guard Heuir scored a game-high 27 points and was full of speed and aggression similar to the previous week’s player-of-the-league, point guard Kyle Adnam, who finished with 18 points, eight rebounds and four assists.

Losing centre Tohi Smith-Milner early in the second half with an injury also didn’t help the visitors’ cause.

The Hawks led 22-20 after the first quarter. Aussie centre Angus Brandt was full of authority under the boards during this period but was fouled out of the match after 15 minutes of action.

Coronel gave Brandt’s minutes to forward Mitchell Newton and he responded with big plays, including a three in the fourth quarter. Newton finished with eight points, including two free throws from as many attempts.

Former Tall Blacks guard Everard Bartlett was another to shine off the bench and this quality of depth will prove valuable to the Hawks at the business end of the season.

The Giants held a one-point lead briefly in the second quarter and this was the first time they hit the front since scoring the first points of the match. The hosts led 41-39 at halftime.

Hawke’s Bay took a 63-62 lead into the fourth quarter after an intense third quarter. When Hawks shooting guard Dion Prewster sunk a three-pointer against his 2017 team to give the hosts an 81-73 lead with 1m 54s left on the clock it was a case of game over and party time for Bay supporters.

It was appropriate Prewster should have the final say with two free throws. He top-scored for the Hawks with 22 points.

Hawks captain Jarrod Kenny was more authoritative with his organisation during the closing minutes of Saturday night’s match than he was the previous night. Giants captain and centre Sam Dempster was again mongrel-like and secured nine rebounds and nine points.