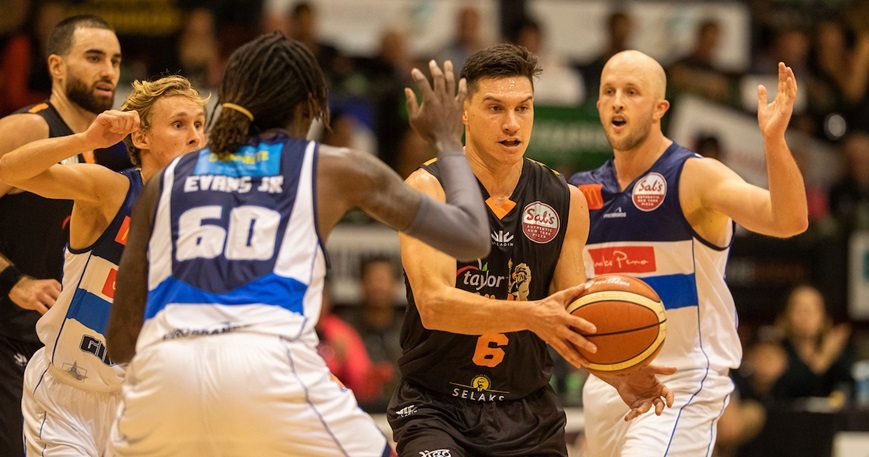 A strong fourth quarter from the Taylor Hawks has them return to the top of the table with a 89-85 win over the Mike Pero Nelson Giants.

The guard duo of Dion Prewster (22 points) and Ethan Rusbatch (20 points) carried the Hawks tonight, both combining for seven points in a pivotal stretch in the fourth which gave them a comfortable enough buffer to hold onto the win.

Some late three’s from Damon Heuir put the visitors within four, but there would not be enough time for Giants as they suffer their first loss of the season. Heuir ended the game with 27 points and Kyle Adamn added 18, but tonight was going to be a struggle for the Giants who coming off a tough win over Taranaki the night before.

Nelson were already shorthanded with no Finn Delany, and then they suffered another blow losing Tohi Smith-Milner for the second half

Nelson did manage to compete for the majority of the contest as the Hawks biggest lead going into the fourth was only six. The game could have gone either way when centre Angus Brandt would foul out, playing only 15 mins, but head coach Zico Coronel decided to give forward Mitchell Newton Brandt’s minutes and he replied with some big plays which included a three in the fourth.

The Hawks now move to 4-1, and will have a big test next week when they face the SIT Zerofees Sharks in Invercargill.

Earlier, the Go Media Jets got their first win with a 124-121 upset over the 2 Cheap Cars Supercity Rangers.

The import duo of Kuran Iverson (36 points) and Daishon Knight (36 points) were unstoppable this afternoon, both players getting into the paint at will.

The visitors got off to a quick start, leading 34-20 at quarter time and going up by as many as 19 second, before a Rangers run got them within five. Manawatu would finish the half strong to be up 65-52 by halftime.

Again, every time the Rangers would be within closing distance the Jets would reply with a mini run to push their lead back up to double-digit points.

In the fourth, it looked like the Rangers would take home the game with 1:15 left when Knight would foul out on a Devon Scott three point play. A three from Clay Wilson put the Rangers within two points, but young point guard Haize Walker hit a huge three to put the Jets back up five.

Walker would hit two free throws in the dying stages to make it a two possession ball game and seal what was a gutsy win for the Jets who only two days ago was on the opposite end of the country.

Walker would end the game with 13, and off the bench Theo Johnson would add 10 for Manawatu who shot a season best 60% from the field and 15/25 from three.

The Rangers would be extremely disappointed not to get the win after adding former Kiwi MVP Marcel Jones to the roster. Jones would end the game with 14 points and 11 rebounds.

Shooting guard, Wilson, was on fire today with a league high 48 points which included 11/16 from three.

After announcing his retirement at the end of the season, Lindsay Tait, still showed that he has plenty in the tank, tallying a triple-double of 20 points, 14 assists, and 10 rebounds.

The Rangers will now travel south to play the Augusta Airs tomorrow afternoon, and will need to improve defensively if they wish to end their four game losing streak.