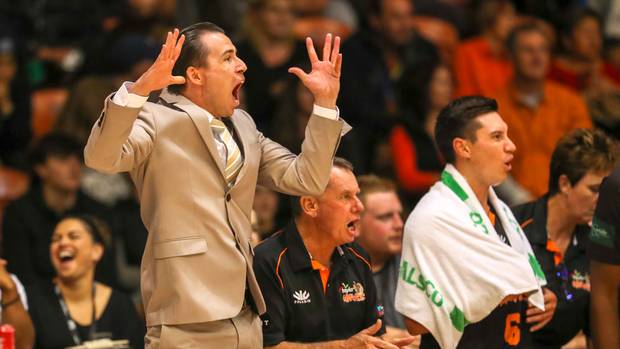 One simple message should be written in bold letters on Hawke’s Bay basketball team coach Zico Coronel’s white board when his troops turn up for training today.

Coronel agreed his players had to be more aggressive in the wake of the Taylor Hawks 104-74 loss to the SIT Zerofees Southland Sharks in their round four Sal’s National Basketball League match in Invercargill on Saturday night.

“It was an old fashioned beat down and they played better. For the whole game they were more aggressive. They were on the front foot from the start,” Coronel lamented.

“We’ve got a collective plan and we know what we need to do. Sometimes it takes something like that to put everyone on notice … to have a think about how much better we need to be.”

“It’s good to know we have an opportunity to address it,” Coronel said, referring to their next match against the Saints in the capital on Sunday. Saints beat the Hawks 93-85 in Wellington on May 11 and will do the same again if the Hawks don’t display a bit more mongrel like they did in their May 12 89-85 win against the Nelson Giants.

On Saturday night the Hawks conceded 28 turnovers, 15 more than the Sharks.

“Turnovers are the result of fundamental errors,” Coronel said, and he’s not wrong.

He pointed out the Sharks owed the Hawks a win after the Hawks beat them 92-84 on April 26. But the Hawks have far too much talent to allow teams to beat them in the way the Sharks, who are coached by former Hawks player Judd Flavell, did.

The Hawks, who have recorded four wins and two losses to date, have already proven they are good enough to reach the playoffs but they need to regain some consistency again.

“The Sharks are a very balanced team. They have the biggest budget and a lot of depth. Six of their players were in double figures tonight … that’s the nature of their team,” Coronel said after addressing his players following the loss.

“Their collective defence was a big factor too,” he added.

Just as disappointing for Hawks fans was the ability of the hosts to establish a 35-point lead at one stage. Sharks centre Alex Pledger scored a team high 17 points in 18 minutes.

The Sharks managed 10 steals, four more than the Hawks, which is another example of the Hawks’ lack of aggression. Allowing the Sharks to score 13 unanswered points at one stage was another.