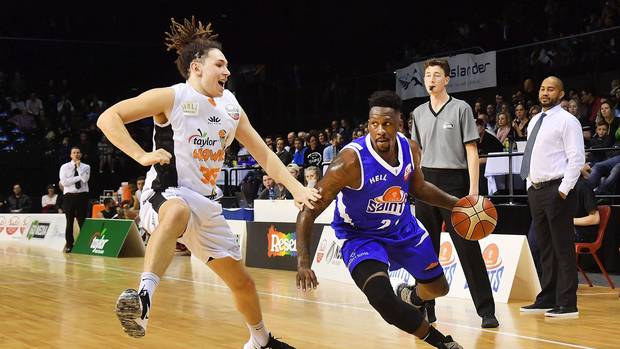 Mitch Newton, by his own admission, was a late bloomer in elite basketball but that does not mean he’s running late in the high-octane lanes of contention.

Oh no, it simply means Newton is only just getting started while everyone else has been charging full steam ahead.

“I did start playing when I was like 15 but even then, I was pretty average,” says the 22-year-old from Gore as the Taylor Corporation Hawks prepare to tip off against defending champions Cigna Saints in their round five Sal’s National Basketball League (NBL) match at the TSB Bank Arena in Wellington in a 3pm tip off tomorrow.

But the genes kicked in in 2012 for the year 12 pupil who had enjoyed a growth spurt so “I grew into my body a bit more, I guess”.

It’s that sort of patience, on the platform of hard work, that has slowly but surely hardened his template in the NBL.

The Saints and Hawks are reloading at the same venue after the Saints won 93-85 a fortnight ago, bearing in mind it’s hard enough to beat the perennial champions anywhere.

However, the hosts didn’t have it easy in the previous encounter, having to reel in the Hawks 28-15 in the final quarter. They found the Hawks’ latest import signing, power forward Jamie Skeen, a handful as he racked up 29 points.

Wellington have bullied the Hawks as of late, winning the past eight games and proudly wearing the badge of honour in not having conceded a match on home turf since 2011.

But Newton hastens to add playing them at TSB Arena again need not be a bad thing as the Hawks look for a rash of games at the back end of the season at the Pettigrew-Green Arena, Taradale.

“Not much did go right. It was disappointing to lose down there,” he says of the 104-74 trouncing they received at the hands of the SIT Zerofees Sharks at ILT Stadium in Invercargill last Saturday.

Reflecting on the clash, he feels the Jarrod Kenny-captained Hawks didn’t follow the script closely enough as they take stock after losing two of their last three outings.

Guards Dion Prewster and Ethan Rusbatch will need to come to the party with all their bells and whistles after lean pickings against the Sharks.

“We just lacked a little bit of energy, I guess, and they [Sharks] just came out firing.”

The 1.99m power forward agrees it’s never easy to win on the road.

The collective mantra is to play their game and trust their systems in a bid to finish clinically.

Point guard Kenny is coming off a season-high 18 points against the Sharks and scored one fewer against the Saints but his preoccupation tomorrow will be to try to contain a rampant Shea Ili, who accrued 26 points and eight assists against the Hawks in week three.

Newton attests to the ideology of everyone fulfilling the roles stipulated in their portfolios.

“If everyone is like finding their roles and knowing where to get their shots and things like that, then we’ll be gelling a little bit more.”

Averaging 15 minutes a game so far this season in his debut for the Hawks, he is refreshingly honest that more court time would be better.

Hawks coach Zico Coronel had approached him last year when he was with the New Zealand Breakers development team.

Newton, who represented the Southland Sharks for four seasons, harbours ambitions of plying his trade in the Australian National Basketball League and the Tall Blacks but isn’t sure where he’s at with the Kevin Braswell-coached Breakers just yet after one game last season where had one free throw.

Newton’s christening, as it were, in basketball began at Archer Stadium, Gore, where aunt and uncle Erin and Peter Howes were on the board.

It was, in fact, the prowess of former Sharks player Peter that took his fancy, although Newton’s mother Diane and Erin also found traction with the hoop.

Not that he ever lacked pedigree because his father, Greg Newton, won a world softball title with the Black Sox in South Africa in 2000.

Mitch Newton says he gave softball a shot for a couple of years, making the cut for Southland age-group teams as a centre outfielder and a little as a batter but couldn’t emulate the feats of his pitcher father.

“I wasn’t anything special,” he says with a laugh.

He always had an affinity with basketball and that took over.

He clarifies that he wasn’t bad at basketball but just someone who strived to incrementally get better year after year before becoming “the best player”.

Ask him if he is too hard on himself perhaps because his father has set the bar pretty high in the family, Newton says: “Ah, I wouldn’t say that … aw, I guess so, I must have tried to be the best I can be.”

He represented Australian team Albury, on the border of New South Wales and Victoria, from February to August last year.

As No 4, Newton can stretch the floor and isn’t shy to find some love with the rims any time he has a look in.

While he has been coming off the bench, he has been making the most of helping finish off games, especially if Australian import centre Angus Brandt finds himself in foul trouble.

“I’ve just got to keep putting in the hard work,” he says.