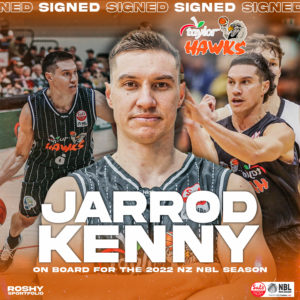 From 2002 to 2008, Kenny split time between playing for the Harbour Heat and earning his physiotherapy degree at the Auckland University of Technology.

In December 2008, Kenny signed with the Hawke’s Bay Hawks for the 2009 New Zealand NBL season. He became a staple with the Hawks, spending the next seven seasons with the team.

On 29 December 2014, Kenny signed with Licher BasketBären of the German ProB. He appeared in 12 games for Licher, averaging 6.3 points, 4.3 rebounds, 4.2 assists and 1.2 steals per game. He returned to New Zealand in early April for the start of the 2015 NBL season.

In June 2020, Kenny was acquired by the Otago Nuggets for the 2020 season. In his 19th season in the league, he won his first championship.

Kenny spent multiple seasons with the New Zealand Breakers as a practice squad player, but never got the call up to the top group. After impressing during the 2015 FIBA Oceania Championship, Kenny signed with the Perth Wildcats for the 2015–16 NBL season on 1 September 2015. Kenny helped the Wildcats win the NBL Championship in March 2016 with a 2–1 grand final series win over the New Zealand Breakers. He appeared in all 34 games for the Wildcats in 2015–16, averaging 4.6 points, 2.1 rebounds and 1.3 assists per game, earning the club’s Coaches’ Award at the end-of-season MVP Ball.

On 11 May 2016, Kenny re-signed with the Wildcats on a three-year deal. Despite his minutes decreasing in 2016–17, Kenny remained a crucial figure in the rotation; his hard-nosed defensive aptitude, team-first mindset and likening for the big moment have made him a firm favourite of coach Trevor Gleeson. The Wildcats went on to win the NBL Championship in March 2017. In 30 games, he averaged 4.1 points, 1.8 rebounds and 2.0 assists per game.