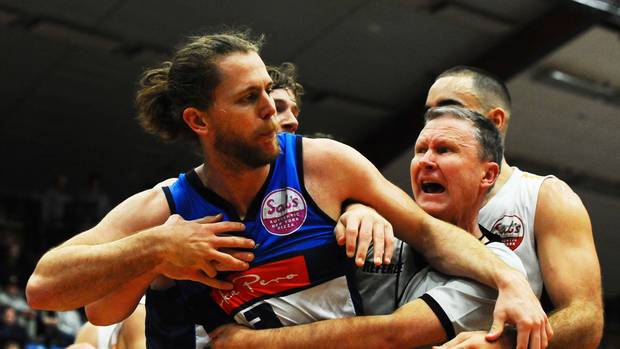 “He’s come from a foreign country and done really well,” said Zico of Pearlman after the Mike Pero-sponsored hosts thumped the Taylor Corporation Hawks 101-78 at Trafalgar Centre in week six of the Sal’s-sponsored NBL on Saturday night.

In his rookie year as head coach after 13 years as an accomplished assistant, Coronel said some coaches often assumed the mantle without much knowledge of the NBL here but the Australian was an exception.

“He has great knowledge of the league and understanding of the officiating in our league,” Coronel said of the 46-year-old from Cairns, who coached the Taipans in the ANBL last season.

Coronel felt Pearlman had done the best job of all the incumbent NBL coaches in adapting to the refereeing in NZ to teach his players how to turn the officiating to their advantage.

“They do the best job of utilising the nature of the refereeing. He gets credit for developing that, among many other things.”

So what is the nature of NBL refereeing in New Zealand?

“They have a lot of room to improve,” said Coronel, revealing Giants forward Mika Vukona, who reportedly has designs on becoming Nelson player/assistant coach, had asked Hawks Australian import centre Angus Brandt how he was finding the NBL.

“He [Vukona] knew what the answer would be because it’s difficult to adjust to a country where it’s been the story of people coming here from other countries for almost 40 years and it continues to be that way,” Coronel said, adding YouTube videos lent credence to that assertion.

“For Jamie to come in this year and understand it, you know, is a great finishing job on his part.”

He said every other NBL mentor needed to look at how they coached and to take a leaf out of Pearlman’s book to work on issues.

Put another way, Coronel said coaches needed to look at how they could develop the game based on the way it was stipulated in the rule books or try to understand how the officials interpreted the rules and their ability to enforce them.

The Hawks could not back up their character-defining 91-76 win over the Wheeler Motor Canterbury Rams in Christchurch on Friday, losing the first three quarters 21-10, 30-19 and 27-23, respectively. The visitors won the final spell 26-23 but the hosts had the points well and truly in the bag and were under no pressure to contest anything.

The turning point in the game was when the officials called a technical foul on Brandt in the second quarter to rob him of further play in the remaining minutes that spell.

Coronel felt the Hawks just weren’t good enough rebounding or defensively, which resulted in a blowout that gifted the Giants the luxury of going to their bench.

“We didn’t roll over and we competed much harder, which added a bit more respectability to the scoreline, but, ultimately, not a close game.”

The Hawks had a lot of good looks in the first quarter but didn’t find much love from the rim. Coronel suspected that might have been the product of heavy legs from a double header on the road.

“They shot the ball very well. That is expected because they had looks where you’d expect them to shoot the ball at a good percentage.”

Coronel heaped praise on his captain, Jarrod Kenny, on the grounds that the point guard had played consistently this season regardless of whether the Hawks won or lost.

That was a reflection of Kenny’s experience because he wasn’t just some confidence player but someone who had mental fortitude, the coach said.

While Vukona made only a cameo appearance, Coronel said the Tall Blacks captain’s presence and contribution through leadership should not be underestimated.

The return from injury of Finn Delany, one of the outstanding players in the NBL, had a huge impact on how the hosts had functioned.

“I guess we had three imports the last time we played them so we’re not quite at the same strength we were at then.”

Coronel felt the Hawks had won the important game of the double headers against a quality Rams who had lost only one game before the tip off.

However, with five teams in contention for the final four playoffs it was imperative for the Hawks to remain on track.